Due to a misunderstanding between the race organiser and the NT/Natural England, the 2018 race actually went ahead without having gained permissions from all of the land owners. This issue came to light late in 2019 and did not allow enough time to gain the permissions for the 2019 race leading to its cancellation. A new race organiser was sought and I volunteered. The first task was to gain the necessary permissions, but this failed in that I was denied "off footpath" access to both Brown Knoll and the Harry Hut area. This necessitated a redesign of the race route to keep it 100% on NT land, which really simplifies matters as I am now only dealing with a single landowner.

After a bit of toing and froing with the NT the route shown below has been agreed and has been submitted to Natural England (NE) for their approval. NE have a turn-around time, so hopefully I will have the race confirmed by March/April 2020.  The race is still an "AL" but it is actually easier than the 2018 version as I have had to stay to footpaths as much as possible. This will make for easier running and I would expected the men's 2018 time of 02:22:24 to be well beaten.

With access being denied to the Harry Hut area, it was decided to continue straight onto Mill Hill, and then down William Clough. But the safety aspect of this was questioned as William Clough is very narrow and there could well be a lot of walkers assending as the runners were descending, so the decision was made to reverse the race route.

This will make for an ideal first AL for anybody wanting to give this category a go as it is right down near the minimum acquirements for this category.
Site of Special Scientific Interest (SSSI)
This area is a SSSI, which does limit where the race can go. Hence there are a lot of checkpoints, to stop people going "off-piste", which would endanger getting permissions for future events. The CPs are not set in stone but the route will be more of less what is shown below.
This is the route details that have been agreed with the NT and have been submitted to Natural England

I did the Blackpool Marathon back in April 2009 and afterwards I decided I had enough of road running – I needed to find something different. To cut a long story short within a month I was out on a Thursday run with Pennine up Lantern Pike on a relatively quite evening as a lot of people were travelling up to Jura. Not long afterwards there was great excitement on a Thursday night that went way above my head. But from what I could work out somebody had done a long run, which I assumed was a race. Dave Bowden explained that it was not a race but a personal challenge, I was still not the wiser. (Who would that have been 2009?) Sometime later my brother in Dublin asked me to order a book about hill running for him as the postage to Ireland was too expensive. You guessed it Feet in the Clouds. Well I had to read it before bringing it back to Ireland at Christmas. The seed was sown! I knew that it was  not practicable back then, I was just too new to fell running and my family was too young. I decide that I would wait until my 50th year when two of the three kids would be in secondary school and that would give me more time for training. I was partially happy for it to be a long way in the future as I was a bit (a lot!) scared of the amount of training.

Over the past few weeks as the day drew nearer I was starting to get a bit scared of the training finishing, what would I do afterwards! My first concrete involvement with the BG was with Andy Gibbons back in 2012. Not a good start midnight in Keswick and my light decided to die on me so crazily I headed up Skiddaw without a light. Then I got dropped at the top of Blencathra as I put my rucksack on after giving Andy some food and went on to miss the right turn down Doddick. I went on to do four and five that day in fantastic conditions. I was involved with Paul Booths first attempt doing legs 2, 3 & 5. Amazing leg 2 seeing the dawn rising and the temperature inversion all around us. Saw the other side of it as Paul bravely fought on (especially on five) despite the knee injury. But it was the amount of people that gave up their weekend and worked so hard to keep Paul motivated when he struggled so much that was the real spirit of the BG. 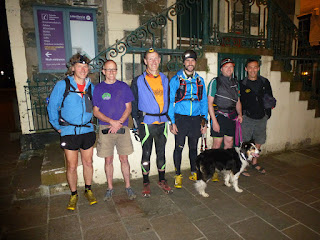 Now it was my turn and I could not believe how strong a team I had assembled around me. Midnight start and Robin, John Doyle and the two contenders Glynn and me headed off. Good atmosphere climbing Skiddaw with three separate groups getting mixed together on that long climb. I learned previously from my 3 leg recce how difficult bread is to eat when pushing yourself so I had the brain wave of cutting up my ham sandwiches into eights so I would have bite size pieces.

Two mistakes in that:
1) I should not have put the jaffa cakes in the same bag.
2) don’t stuff them into a side pocket of a rucksack.
The combined mush of Jaffa cakes ham and bread was not very nice and John spent the whole climb trying to stuff them down my throat. While that was a bit of a fail what was brilliant was the “High 5 Energy Source” so easy to drink and gave loads of energy. Many of you will have read the brief summary on Facebook, but basically Leg 1 was excellent, interesting seeing all of the different route choices really making very little difference when it came to finishing the leg. The omens had started to arrive when the wind had build up on Blencathra and I speculated to Glynn on the benign conditions climbing Clough Head “what will the wind be like when we get up there?” Brutal was the answer we were 10 minutes up on schedule getting to Clough Head but straight away we started loosing about 2 minutes on each split after that and it only got worse. Ian was working flat out with his compass and route card to keep us on track and on a couple of occasions I had to drag out my Garmin eTrex with my BG route on a OS 50,000 map to double check directions. That leg was one of the hardest things I had ever done, got to Dunmail absolutely shattered and saying to myself how can I do another 16 hours of this? Up Steel Fell and Glynn obviously felt the same as me as he fell behind on the climb. Colin stayed with him while Geoff Simon Harden and me continued in front. The wind had dropped but visibility was very poor. Geoff frequently disappeared off in front as he made sure of the lines in advance. The leg went petty good except that I could see that I was just not making the splits. I suppose that got me down and I was commenting to Geoff that maybe it was a case of not enough training on this type of ground and not pushing myself enough in training. While I had given up on the 24 hrs Geoff and Colin most definitely had not as they bullied me into keeping going.

By Scafell I had decided to lets make the best job I can out of this so Geoff shot off down to Wasdale to get Lucy and Mark ready as I was not stopping. I was just thinking of being 2 hrs down at Wasdale but they explained that is on a 23 hr schedule and by skipping the two 20 minute stops that knocked the deficit down to 20 minutes, which was still doable. That gave me a new lease of life as I went straight though Wasdale to set my fastest ever time up Yewbarrow. I can’t say enough about Lucy and Mark as they encouraged me hassled me stuck every sort of food down me to keep me going over the following hours. We were inside schedule to Pillar but then Geoffs tactic of delaying till Wasdale the second dose of pain killers I took for the knee injury that started to develop in the Langdales started to wear off and I begun to really struggle on the big down hills. So from being a couple of minutes ahead of schedule on Pillar we finished the leg in 6.5 hrs at 22:30 and that was it I called it a day. It was frustrating I was very tired but nowhere near wiped out and could easily have got to Robinson, but it was the though of the following descent and the road that put me off continuing. I was probably looking at another 4.5 hrs to Keswick.

I am here now with lots of emotions, there has been so many kind words on Facebook, the forum and work colleagues. 39/42 peaks is a great achievement and I am rightly proud of it, but can’t help being frustrated and disappointed as well.
Posted by Kinder Groovy Love at 16:18 3 comments:


Leg….Start……Duration
1……00:00……4:00
2……04:20……4:05
3……08:35……5:40
4……14:35……5:00
5……20:07……3:00
That was some adventure, fantastic first leg in good conditions. Bit crowded with three groups starting at the same time and staying pretty much together until Great Calva when everybody went different ways (us the fence line) to all pretty much came together at Blencathra. Once again we took Doddick while everybody else took Halls, very little in it. Leaving Blencathra the wind was starting to build up. Good climb up Clough Head but then the full force of the wind hit us. Brutal stuff, lots of minor nav mistakes with the wind and poor visibility it was so easy to loose the trods. It was so mentally exhausting trying to keep pushing in those conditions. 5 hrs for that leg and the following morning my Leg 3 pacer was telling me I was ashen faced when I got to Dunmail. It is actually 3 that I am most disappointed with, GeoffB took over nav and done an excellent job in very poor visibility. I think I was very tired after 2 and could not take advantage of the easier sections to keep to the schedule. 7:30 to Wasdale and 24 hrs was looking unlikely but I still wanted to finish. Lucy done a fanatic effort on 4 and she had me believing that it was still possible. We had a excellent, inside schedule, leg to Kirk Fell. I though something like a 24:30 was possible, but the pain killers for a knee injury since the Langdales were starting to have less effect and I lost so much time on the descent of Piller, Kirk Fell and Great Gable. I could have carried on from Honister but the though of the Robinson descent and the 10 Km on the road was too much. While it was not a success, it was still an amazing experience. Thank you does not even come close to what I have to say about my Pennine Club members for the work/hassling/encouragement they done through out that day.
Open Tracking Live Tracking (Click HERE to open in new tab)
Posted by Kinder Groovy Love at 06:29 2 comments: